Reprinted with permission by author from MiriamFeinbergVamosh.com 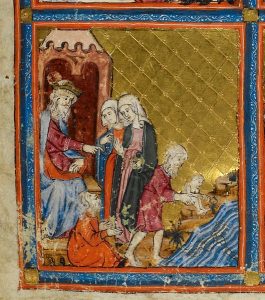 There are so many nameless women in the Bible, and yet the two midwives in the Exodus story who stood up to Pharaoh and saved the Israelite babies get two names each in ancient rabbinic literature. According to one account, the midwives’ names, Shiphrah and Puah (Ex. 1:15), were code names for Miriam and Jochebed, Moses’ sister and mother. Shiphrah was Jochebed, the story goes, because Shiphrah means “cared for” and Jochebed used her skills to care for newborns. Puah equals Miriam because Puah means “cry out” – and Miriam would “cry out through the Holy Spirit, ‘my mother will bear a son who will be the savior of Israel’” (Babylonian Talmud Sotah 11b).

The numerous permutations of the midwife story in rabbinic literature throughout the ages, extending even to a talmudic debate (Sotah 11b) over the birthing room equipment, shows how intrigued the sages were with these two women. They intrigue me too. But what I want to know is where they got the courage to resist the will of Egypt’s all-powerful sovereign, at the risk of their own lives.

Perhaps because of Shiphrah and Puah’s association with Miriam and Jochebed, we usually imagine the midwives as Hebrew women. In Hebrew, the Bible calls them hameyaldot ha’ivriot, which is usually taken to mean “the Hebrew midwives.” But this term might also mean “the midwives of the Hebrew women.” So for all we know, they might have been Egyptian, or perhaps from from Nubia (partly today’s Sudan), which was ruled by Egypt in various periods.  To the Roman-Jewish historian Josephus, it was obvious that the midwives were Egyptian (Antiquities 2, 205).

So, the sages conceded, the midwives may not have been Hebrews. Still, they couldn’t resist making them honorary members of the tribe – according to some medieval sources they were “righteous converts” to Judaism.

But I like to think of them as full-fledged Egyptian women; “righteous gentiles,” we’d call them today, saving lives oblivious to ethnicity, endangering their own to do so. And I learned that it was ethnic prejudice and hatred for the Hebrews, the “other” in this saga, that defeated Pharaoh’s own plot against them. When he finds out that the Hebrew babies’ lives were spared, blinded by his own ignorance, he falls for the midwives’ unlikely argument – a ruse – that Hebrew women give birth faster than Egyptian women  – so fast that they can’t get there in time to take their babies away.

A Palestinian baby injured in a car accident last year was breastfed by a Jewish ER nurse after he refused to take a bottle. The baby’s mother had sustained a serious head injury and his aunts asked the nurse, Ula Ostrowski-Zak, to help find someone to nurse him. Ula volunteered. “I breastfed him like I do my own son….I’m here all night. It seemed so straightforward,” she told Ynet news at the time. (Photo: Hadassah Hospital Spokesperson)

I like to imagine those brave biblical midwives carrying out their task unconcerned with the identity of their patients – like medical professionals today, sworn to equally treat every human being who comes to them in need, “whether common or distinguished, friend or foe,” as the oath of the Israeli army medical corps states.

A Palestinian baby injured in a car accident last year was breastfed by a Jewish ER nurse after he refused to take a bottle. The baby’s mother had sustained a serious head injury and his  aunts asked the nurse, Ula Ostrowski-Zak, to help find a someone to nurse him. Ula  volunteered. “I breastfed him like I do my own son….I’m here all night. It seemed so straightforward,” she told Ynet news at the time. (Photo: Hadassah Hospital Spokesperson).

These mysterious biblical women, perhaps of another nation, delivered the children of Israel – literally – in their hour of need. There’s no time like the festival of freedom, especially this year, to remember the message Jochebed’s son and Miriam’s brother brought down from the mountain:  “When a foreigner, a stranger, resides among you in your land, do not do them wrong” (Lev. 19:33).

When opportunities come our way, whether extraordinary or mundane, to be there for the other – and our lives are full of them these days wherever we live – here’s a thought: Without the midwives of the Hebrew women, we would never have gotten to the Red Sea shore, much less have crossed it.